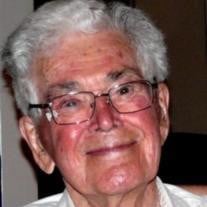 WESTLEY, William Anthony –May 17, 1920-October 9, 2012-Died peacefully with his daughters at his side, at the age of 92. Bill grew up in and around New York City and as a young man set out to obtain the best education possible. He attended Cornell University and the University of Chicago until the war interrupted his studies. Prior to leaving for India, where he served in intelligence, he married the love of his life, Margaret Weaver. After the war, he embarked on a PhD in Sociology at the University of Chicago. His doctoral dissertation formed the basis of his groundbreaking book Violence and the Police. In 1951 he moved to Montreal with his family to take a position at McGill University, where he remained for his entire career as a professor, chair of the Sociology Department and director of the Industrial Relations Centre. Later in life he established the consultant firm STS Associates and was honoured as Emeritus Professor at McGill. He and Margaret divided their time between Montreal and their country home in Hatley, Quebec, where they were active members of the community. His last years, after Margaret died, were spent in Stratford and Waterloo where he continued to engage in vigorous intellectual debate and lit up every room with his infectious laughter. Predeceased by his wife, Margaret Weaver Westley, he is survived by his sister Joan Lucas, brother David Westley (Dianne) and his three children Neil (Conney), Frances (Fred Bird) and Meg (Jay Klassen.) He will be missed by all of them, as well as by his grandchildren Kim, Dawn (Gene), Jason, William, Jenny, Andrew, Eric, Katie, Clara (Ola), Jane, Mike, Jamie and step-grandchildren Rebecca (Adrian), Bruce (Natasha), Aaron (Liz) and Carla (Anna.)He is also survived by fourteen great-grandchildren. Donations may be made in his memory to Dying With Dignity Canada www.dyingwithdignity.ca or the Waterloo Regional Homes for Mental Health www.waterlooregionalhomes.com. A memorial service will be held November. www.futher-franklinfuneralhome.com

WESTLEY, William Anthony –May 17, 1920-October 9, 2012-Died peacefully with his daughters at his side, at the age of 92. Bill grew up in and around New York City and as a young man set out to obtain the best education possible. He attended... View Obituary & Service Information

The family of William Anthony Westley created this Life Tributes page to make it easy to share your memories.

Send flowers to the Westley family.