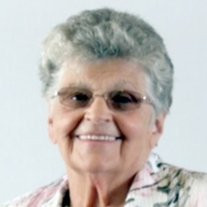 LEIS, Ruth (nee Steinmann)-Surrounded by family, passed away at Grand River Hospital, Kitchener on Friday, November 29, 2013 in her 87th year. A loving woman of God, a mother, grandmother, great-grandmother to more than just her immediate family. Ruth, a longtime resident of Wellesley, was the daughter of the late Moses Steinmann and the late Mary Schmidt. Ruth freely gave of her time and talent. Many hours were spent sewing, making costumes, cooking, baking and caring for many in the community. She was awarded the Wellesley Citizen of the Year in 1989. Beloved wife of the late Harold A. Leis (2010) Loving mother of Gary Leis (Brenda) of Wellesley, Ron Wasylcia-Leis (Judy) of Winnipeg, Judy Johnson of Wellesley, Sandy Poole (George) of Wellesley and predeceased by infant son Larry Michael. Ever remembered by 21 grandchildren and 18 great-grandchildren. She will be sadly missed by her sister in-law; Gerry Leis of Kitchener as well as many nieces and nephews. Predeceased by her brother Roy Steinman and sister in-law Noreen Steinman. Special thanks to the nurses of Nithview Retirement Home, New Hamburg and Grand River Hospital, Kitchener. Friends may call at Wellesley Mennonite Church, 157 David Street, Wellesley on Saturday 7-9 p.m. and Sunday 2-4 & 7-9 p.m. Interment with the immediate family at Rush’s Cemetery. Funeral Services will be held at Steinmann Mennonite Church, 1316 Snyder Road West, Baden on Monday, December 2, 2013 at 3 p.m. Pastor Kara Carter officiating. Donations in memory of Ruth may be made to Hidden Acres Mennonite Camp, M.E.D.A. or Wellesley Mennonite Church (Missions) would be appreciated. Arrangements entrusted to Futher-Franklin Funeral Home, Wellesley. Ruth’s faith in God, helped her face many physical challenges and pain. She was always able to say “It is well with my soul”. Her love and acceptance of all, will be carried in the hearts of many. www.futher-franklinfuneralhome.com

LEIS, Ruth (nee Steinmann)-Surrounded by family, passed away at Grand River Hospital, Kitchener on Friday, November 29, 2013 in her 87th year. A loving woman of God, a mother, grandmother, great-grandmother to more than just her immediate family.... View Obituary & Service Information

The family of Ruth Leis created this Life Tributes page to make it easy to share your memories.

Send flowers to the Leis family.