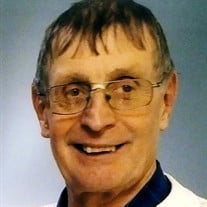 VOLLMER, Richard-Passed away peacefully on Tuesday, August 8, 2017 at Innisfree House, Kitchener, Richard of Wellesley-Lisbon in his 73rd year. Beloved husband of Helen (nee Peterson) for 47 years. Loving father of Jason of Kitchener, Nolan (Tricia) of Nanaimo and Corey at home. Dear Grandpa/Opa to Cassidy, Reilley, Erik, Alen and Lorelai. He will be sadly missed by his siblings; Marlene Vollmer of Constance Bay, Dianne Maurice (late Brian) of Nelson, Shelley Baer of Salmo and David (Brenda) of Kitchener. Brother-in law to Karen Gormley (late Bill) of Sombra, Carl Peterson (Kate) of Goderich as well as his nieces and nephews; Jacque, Janette, Michael, Stephen, Darryl, Danielle, Matthew, Ed, Brad, Chuck, Christine and Susan. Predeceased by his parents Sheldon Vollmer and Leona (nee Graff). Richard was a construction millwright for Local 1916 Hamilton for over 40 years. He was very involved with Twin Centre Minor Hockey for 38 years. He was a coach, trainer and convener both for rep and house league hockey. He was on the Silver Stick committee and O.M.H.A. contact. Director of Southern Counties. Selected for Life Membership in the Grand River Local League of the Ontario Minor Hockey Association. He spent countless hours volunteering his skills and leadership for others at both the Wellesley and St. Clements arenas. He was awarded the Wellesley Citizen of the Year in 1997. In his spare time, he was an avid fisherman and bird watcher. Friends may call at the FUTHER-FRANKLIN FUNERAL HOME, 1172 Henry Street, Wellesley, on Sunday from 2-4 & 7-9 p.m. Parish Prayers at 8:45 p.m. Funeral services to St. Agatha Roman Catholic Church, 1839 Notre Dame Drive, St. Agatha for Funeral Mass on Monday, August 14, 2017 at 11 a.m. Father D. Lobsinger C.R. officiating. Cremation to follow. Special thanks to the Grand River Hospital Oncology, C.C.A.C. of Waterloo Region and Innisfree House for the wonderful care provided by all. Donations to Innisfree House or the Grand River Hospital Foundation would be appreciated. www.futher-franklinfuneralhome.com

The family of Richard Vollmer created this Life Tributes page to make it easy to share your memories.

Send flowers to the Vollmer family.