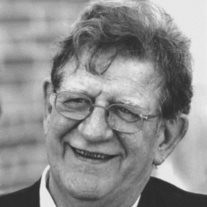 COURTEMANCHE, Rene-Claude Peacefully, at Headwaters Health Care Centre, Orangeville in the early hours of Wednesday February 5, 2014 in his 77th year, after a lengthy illness. Loving husband and partner in life to Norma (Jaques), devoted father to the late Rick (Janine Melanson), to Jerry (Angela Schaefer) and to Linda Ann (Bruce Philp). Doting Opa to Rafael van Streepen, Celeste Courtemanche, Philip Courtemanche and Christopher Courtemanche. Proud brother to the late Jean-Jacques, Léonard (Annie Gourven), the late Michelle (Marc-André Morand), Serge (Aline Roy), Pierre-Paul (Micheline Custeau), Mario (the late Sandra Campbell), Suzanne, Andrée, Louise, Louis (Elizabeth Rogers), Alain (Madeleine Paquet), Judith (Jacques Valentine) and Manon (Yves Gascon). Claude was born in Magog, Quebec, and raised in the warm chaos of a large, traditional Quebecois family. It was there he acquired his lively intellect, his love of music, and the Gallic charm that would not desert him even in his final days. As a young student, this quality earned him the attention of the beautiful Norma, whom he married in 1959, and then helped launch a successful career in industrial sales. Together, they raised their own family, first in Magog, and then in small town Southwestern Ontario, eventually finding their true home in leafy, cultured Stratford. There, Claude became a Certified Financial Planner (CFP) and opened a practice for Investors Group, where his integrity and comforting presence won him the loyalty and affection of his many clients. The work suited him because he loved to help people, but also because it allowed him to indulge his passion for engaging with his community, and perhaps the occasional game of golf. Claude will be remembered and sorely missed for the immense pride he took in his family, for his endless curiosity about the world and passion for debate, and for the warm sociability that could make anyone feel like the most interesting person on Earth with little more than a smile and a twinkle of his eye. These attributes were very much in evidence when his family gathered at his bedside just before his passing, filling the room with laughter and conversation, and creating the parting gift of this treasured memory. His family wishes to thank the staffs of the palliative care unit at Headwaters Health Care Centre and the Avalon Care Centre for their compassion and professionalism. Arrangements have been entrusted to Futher-Franklin Funeral Home. A private cremation has already taken place. A celebration of his life will be held at a later date. In lieu of flowers, his family would appreciate a donation in his honour to the Canadian Lung Association.

The family of Renè Claude Courtemanche created this Life Tributes page to make it easy to share your memories.

Send flowers to the Courtemanche family.