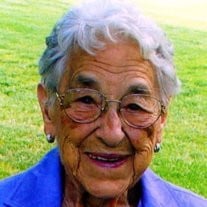 DITNER, Loretta-With sadden hearts, we would like to announce the passing of our mother, Loretta Ditner (nee Rumig) into the arms of her beloved Savior, Jesus Christ, on Thursday, October 10, 2013 at the Palmerston Hospital at the age of 93... View Obituary & Service Information

The family of Loretta Barbara Ditner created this Life Tributes page to make it easy to share your memories.

DITNER, Loretta-With sadden hearts, we would like to announce...

Send flowers to the Ditner family.