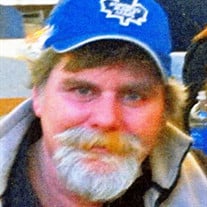 MONAHAN, Keith F.-At his home in Perth-Andover, New Brunswick, on Saturday, February 27, 2016. Keith Monahan, formerly of Burlington in his 53rd year. He will be sadly missed by his wife Nikki Dechenko, his children; Jessica, Christopher, Kayla,... View Obituary & Service Information

The family of Keith F. Monahan created this Life Tributes page to make it easy to share your memories.

Send flowers to the Monahan family.