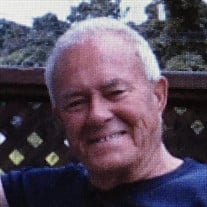 John “Jack” Hossack – formerly of Listowel, passed away with his wife Shirley and daughter Evonne by his side, after battling dementia for over two years, at McGarrell Place Long Term Care, London on Wednesday January 19, 2022 at the age of 84. Jack was born in Hamilton on November 6, 1937. He joined the 2nd Canadian Guards on January 6, 1955 and trained in Petawawa. He served until 1965 specializing in demolitions. During that time, he served as a Peacekeeper stationed at Fork York, Soest in Germany. After an honourable discharge he served in the reserves in Brantford from 1967 to 1972. He trained recruits in a student militia program. Following his military career, Jack worked for Hussman’s Refrigeration in Brantford for 28 years. After retirement Jack enjoyed travelling with Shirley in their motorhome for over 30 years. His favorite winter destination being Arizona. Jack was a member of the Royal Canadian Legion Branch 259 Listowel. He was a former volunteer driver for the Canadian Cancer Society and VON. Beloved husband of Shirley (Pipe) Hossack. Loving father of Evonne Hossack (George Murray) and father-in-law of Cindy Hossack. Special grandpa of Katy (Kyle) Smith, Lacey Hossack (Minh Quach), Krystine Hossack and 10 great-grandchildren. Brother-in-law of Robert and Susan Pipe and uncle of Matt, Jason and Brian. Predeceased by his parents John and Dorothy (Potter) Hossack and his sons Hardy (2011) and Jackson (2021). In keeping with Jack’s wishes, cremation has taken place and there will be no visitation or service. Spring interment in Brussels Cemetery. As expressions of sympathy, memorial donations to Royal Canadian Legion Branch 259 Listowel, the Alzheimer Society or Feline Friends, Stratford appreciated by the family. Arrangements entrusted to Futher-Franklin Funeral Home, Wellesley www.futher-franklinfuneralhome.com

John &#8220;Jack&#8221; Hossack &#8211; formerly of Listowel, passed away with his wife Shirley and daughter Evonne by his side, after battling dementia for over two years, at McGarrell Place Long Term Care, London on Wednesday January 19, 2022... View Obituary & Service Information

The family of John "Jack" Hossack created this Life Tributes page to make it easy to share your memories.

John “Jack” Hossack – formerly of Listowel, passed away with...

Send flowers to the Hossack family.