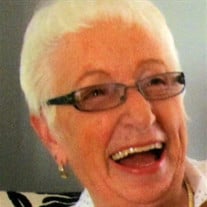 FRIEDMANN, Florence Elaine (nee Wilker)- It is with heavy hearts that we announce the death of our wife, mother, grandmother and great-grandmother on Tuesday, July 12, 2016, at home, surrounded by family. Florence was in her 80th year. She is survived by Frank, her loving husband of 58 years. Dear mother of Tammy Kemick (Wayne) of Waterloo and Valerie King (Mark) of Elmira. Cherished Nana of Ryan King (Molly Petterson), Devon King (Robert Turney) and Jordan King (Kate O’Brien). Devoted GG to Lillian Turney. Lovingly remembered by her sister Marion Michalik, brother Doug Wilker, brother-in-law John Reidl and his friend Judy Miller, sisters-in-law Theresa Friedmann, Mary Reid and Mary Friedmann, brother-in-law Edwin Friedmann and numerous nieces and nephews. Predeceased by her parents Edgar Wilker and Lillian (nee Dunn), and her in-laws Simon and Mabel Friedmann; her sister Phyllis Reidl, her brother David Wilker, and her sisters-in-law Ria Wilker and Agnes Wilker. Also brothers-in-law Jack, Wally, Donny and Philip Friedmann, Don Reid and Wilbur Caskanette; and sisters-in-law Doris Friedmann, Patricia Friedmann, Vera Friedmann and Ann Caskanette. Florence was a longtime resident of Linwood and a great supporter of the community. She retired from Electrohome/Christie Digital as a data technician after 60 plus years of employment. She was an avid gardener, a fantastic baker and an enthusiastic party planner. She loved all things Elvis and a good practical joke. Florence was an active member of the “Golden Girls” and reigned supreme as the “Zoo Keeper” at Electrohome. She enjoyed travelling with the Golden Girls, and she will be forever remembered by her warmth and caring personality, her fierce loyalty to her family and friends and the way she championed a cause. She was a loyal friend, a loving wife, a supportive mother, and the biggest fan of her adoring grandchildren. She touched the hearts of many and truly, to know her was to love her. Florence received exceptional care through CCAC and Hospice of Waterloo Region and we are so very grateful for the compassion shown by Bonnie, Lori, Diane, Heather and Jane along with the rest of the palliative team. Friends may call at the FUTHER-FRANKLIN FUNERAL HOME, 1172 Henry Street, Wellesley, on Tuesday from 2-4 & 7-9 p.m. Parish prayers at 9 p.m. Funeral to St. Mary’s Roman Catholic Church, Linwood on Wednesday, July 20, 2016 for Funeral Mass at 11 a.m. Cremation to follow. As an expression of sympathy, donations may be made to the Grand River Hospital Cancer Centre or Lion's Foundation of Canada Dog Guides would be appreciated. www.futher-franklinfuneralhome.com

FRIEDMANN, Florence Elaine (nee Wilker)- It is with heavy hearts that we announce the death of our wife, mother, grandmother and great-grandmother on Tuesday, July 12, 2016, at home, surrounded by family. Florence was in her 80th year. She... View Obituary & Service Information

The family of Florence Friedmann created this Life Tributes page to make it easy to share your memories.

FRIEDMANN, Florence Elaine (nee Wilker)- It is with heavy hearts...

Send flowers to the Friedmann family.