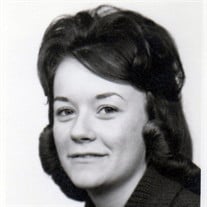 LACHANCE, Diana Sue (nee Doubledee), a resident of Grace Villa, passed away Friday, January 12. She was born to Willus and Gertrude (Skulstad) Doubledee, in Battle Creek, Michigan, USA, June 29, 1947. She attended Lakeview High School, and married Douglas Lachance May 10, 1967. Diana took great pride in their two daughters, pursued her passions of book reading, handicrafts, and sewing, in which she was extremely talented, and was busily engaged in community and church service throughout her life. Afflicted with MS for many years, Diana set an example of how one could still serve others, with grace and humor, despite being severely handicapped. As an American in Canada, she exhibited abiding patriotism and kept up with her love of American politics. In her final years, Diana was attended faithfully by church friends Sue Keenan and Marilyn Zsiros, for which the family is eternally grateful. Diana was preceded in death by her parents, husband, and beloved granddaughter Michelle Miché-Robinson. Diana is survived by siblings Christine (John) Miché, Illinois, Michael (Gale) Doubledee, Missouri, daughters Robyn (Tom) Miché of Missouri, and Lisa (Wayne) Stubbs, Wyoming, 14 grandchildren, and 14 great-grandchildren. A memorial service will be held Sat., January 27, 1:00 p.m., at the Church of Jesus Christ of Latter-day Saints, 701 Stone Church Rd., East Hamilton. In lieu of flowers, the family encourages donations to the Multiple Sclerosis Society. www.futher-franklinfuneralhome.com

The family of Diana Sue Lachance created this Life Tributes page to make it easy to share your memories.

Send flowers to the Lachance family.