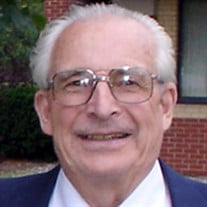 FRANKLIN, Nelson Dale-After a short illness at the Brantford General Hospital on Saturday, August 13, 2016. Born on July 18, 1931, Dale of Brantford in his 86th year. Predeceased on June 25th by his wife Gertrude Marion (nee Darville). Loving father of Stephen of Toronto, Scott and his wife Mary Teresa of Rockland, Christopher and his wife Diane of Wellesley, Todd and his wife Lori of Boston, Lisa and her husband Cam Hill of St. Catharine’s and Jacquie of Brantford. He will be sadly missed by 18 grandchildren and 19 great-grandchildren and by his brother in-law Frank Darville and his wife Janet of Brantford. Predeceased by his parents Henry Franklin (1959) and Jane Nelson (1950) his brothers and sisters; George, Ethel (infancy), Nettie (infancy), Grace (infancy), Bertha Mellor, Norman, Helen Goings, Ruth Gatten and Margaret McMullen. Dale was a well known and trusted diesel and truck mechanic, having worked for himself, for Conklin Shows and retired from the Brantford Truck Centre (Carrier). He was also a member of the Brantford North Lions Club and a recipient of the Helen Keller Fellowship Award in 2005. Friends will be received at the DENNIS TOLL FUNERAL HOME, 55 Charing Cross Street, Brantford on Wednesday from 2-4 & 7-9 p.m. Funeral service will be held in the funeral home chapel on Thursday, August 18, 2016 at 1 p.m. Cremation to follow. Donations to the Lions Club International Foundation for eyesight would be appreciated. Arrangements entrusted to the Futher-Franklin Funeral Home, Wellesley www.futher-franklinfuneralhome.com www.dennistoll.ca

The family of Dale Franklin created this Life Tributes page to make it easy to share your memories.

FRANKLIN, Nelson Dale-After a short illness at the Brantford...

Send flowers to the Franklin family.